This project is a Proof-of-Concept about how to distribute HLS streams in a P2P way using WebTorrent. This is not a replacement of using a HLS stream server, but instead complements them to reduce server costs by offloading server bandwidth usage to the peers.

Why to use this

HTTP Live Streaming is based on the HLS clients doing plain GET HTTP requests of stream fragments. These ones doesn't change over time, so it's possible to use "fragment" files on a CDN or a static web server instead of a regular one and reduce costs. But also in that case, all requests will go to them and there will be network costs. By taking a P2P aproach, it's possible to serve these fragment files the same way any P2P filesharing application would do, reducing network costs by fetching them from other users that have already got them. In this case, the P2P protocol being used is BitTorrent, and more specifically the WebTorrent implementation, that allow to use it in web browsers. 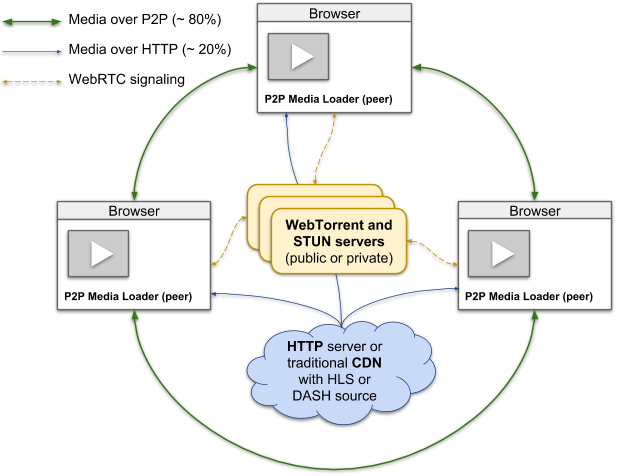 This proof-of-concept has five diferenciated components:

For testing purposes, stream is just a video test card, being the generator script available at scripts/generate-video.sh.

P2P Media Loader starts downloading the stream fragments from the HLS stream, that's using a HTTP server or a CDN. At the same time, it connects to the WebTorrent tracker using WebSockets to exchange the WebRTC SDPs to create connections with the other peers, and start using the BitTorrent protocol to find other peers and ask for missing stream fragments. In case a P2P connection can't be stablished, or no one of the other peers has the missing fragments, they will still be fetched using regular HLS instead.

When the playing of the HLS stream starts, it first pick the stream fragments from the HTTP server or CDN, and at the same time, it ask in advance for other stream fragments to other peers in the WebTorrent network. The P2P management and transmission is fully done on client side, so it's transparent to the HLS streams used as source.

wt-tracker needs to be configured first, so run it with:

The <video> tag of this PoC has both the autoplay and muted attributes because since Chrome 66, videos with sound are prevented to autoplay by default to prevent annoy users. You can find more info at https://stackoverflow.com/a/49822987/586382 and https://developers.google.com/web/updates/2017/09/autoplay-policy-changes.